Next up was Agustina Mendez from the Hay Group, a global management consulting firm.

"Leadership 2030 - Leadership Characteristics of the Future" 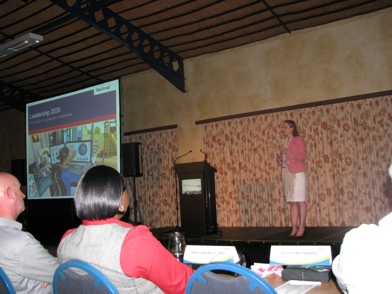 This was a fascinating presentation giving a glimpse into the potential future and attempting to predict the kind of leadership competencies that will be required of leaders in the near future. To take an educated guess into the future the Hay Group partnered with Z_punkt, a company specialising in future scenario planning. Z_Punkt identified 20 "mega-trends" of the future that the Hay Group then worked with from an HR and leadership perspective to tease out the competencies that would be needed under these conditions. 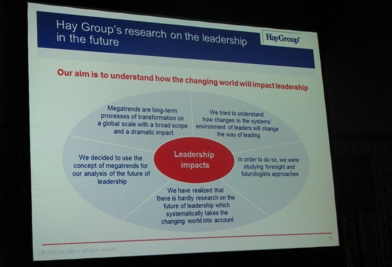 A "mega-trend" was defined by Z_punkt as a trend which would have global consequences due to the scale of impact, the reach of the trend and the time-frame during which the trend would take place. In her presentation Agustina only had time to look at 5 of the 20 mega-trends, but the full research report can be purchased from the Hay Group. The 5 trends from the presentation were: 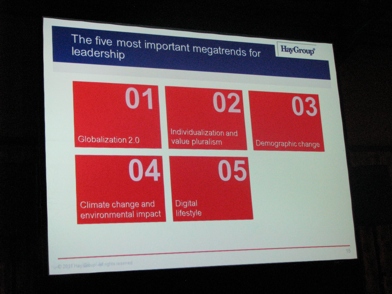 Agustina also referenced research the Hay Group  had done on different kinds of leadership styles one of which was titled, The Indian CEO, the other was The Chinese CEO. Both reports present a refreshing picture of new emerging global CEO styles which are very different (some would say more ethical) than the reigning European CEO and US CEO models.

Some of the insights from Agustina's presentation: 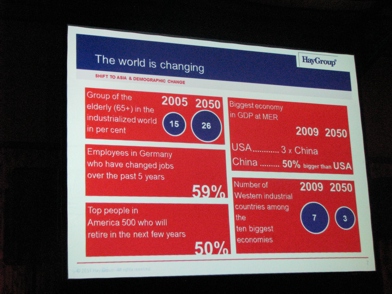 Agustina ended her presentation with this statement to leaders, "if you are only in it for the title you are not going to be able to stick it out in the job - its just not sustainable."

You can download Agustina's presentation here.
Posted by Mike Stuart at 22:53