Update  23 May - the petition has received over 50,000 signatures in two days

However governments (and corporate media) are increasingly acting as if they feel threatened by the rapid transparency and social action that the internet has made possible, and in many countries we are seeing a crackdown on transparency, journalists and whistle-blowers. Even in traditionally strong democracies such as the United States, this trend is visible in the crackdown against Wikileaks, the Associated Press and more recently Fox News. Now in South Africa we are days away from having a Secrecy Bill signed into law by President Zuma. Despite extensive lobbying the Bill still does not include the vital "public interest" clause which would protect journalists and whistle-blowers from 25 years in prison for communicating information that is vital to the "public interest". There is the very real potential here for corruption and incompetency to be removed from public accountability if this Bill becomes law.

Note: - I do agree that the media is in need of greater accountability and transparency. In my view the way to do that is through:
The  quality of the decisions we make individually and nationally are based on the quality of the information we have available to us. Please vote against this limitation on the information you will have access to in the future. Why should someone else choose what you can know or not know about? Find more information and vote here. 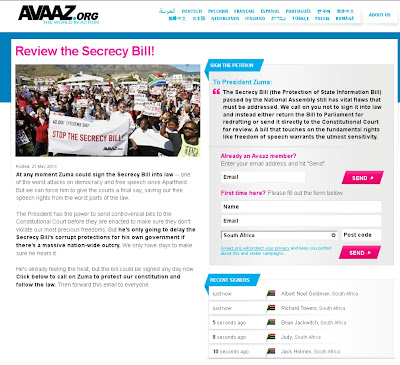 Here is the body of the text from the Avaaz media flyer:

At any moment Zuma could sign the Secrecy Bill into law -- one of the worst attacks on democracy and free speech since Apartheid. But we can force him to give the courts a final say, saving our free speech rights from the worst parts of the law.

The President has the power to send controversial bills to the Constitutional Court before they are enacted to make sure they don't violate our most precious freedoms. But he's only going to delay the Secrecy Bill's corrupt protections for his own government if there's a massive nation-wide outcry. We only have days to make sure he hears it.

He's already feeling the heat, but the bill could be signed any day now. Click below to call on Zuma to protect our constitution and follow the law. Then forward this email to everyone:

The Secrecy Bill would be bad news for South Africa. Really bad. Under it, anyone who looks at leaked classified files (like journalists reporting on government graft or everyday citizens accessing them online -- anyone!) could get up to 25 years in jail, regardless of how important the story is to the public. The bill that passed included important revisions, but they fall far short of what's needed: far too many officials still have the power to unaccountably classify documents, and the exemption added for whistleblowers has a major loophole that could make it all but useless in practice. Altogether, the law would be a major roadblock in our ability to uncover and investigate government corruption.

Citizens can bring the Secrecy Bill to court after it's passed, but the process takes a long time and could cost millions. Even so, many legal experts say that the law pretty clearly violates our free speech rights. Zuma has the chance to give the constitution the respect it deserves and have the court review the bill before it becomes law and starts doing damage.

The clock is ticking and we don't have a moment to lose. Let's push Zuma to respect the law before it's too late. Click below to sign and forward to everyone:

When the Secrecy Bill was first tabled in 2010 and brought to vote in 2011, Avaaz members joined the national call for freedom over secrecy, along with the diverse organizations behind the Right to Know Campaign. Now we have a chance to step in again and keep the pressure up on Zuma's attack on our democracy.

Will the Secrecy Bill go to the Constitutional Court (Mail and Guardian)
http://mg.co.za/article/2013-04-25-will-the-secrecy-bill-go-to-the-concourt

What's still wrong with the Secrecy Bill (Right to Know)
http://www.r2k.org.za/2012/08/29/whats-still-wrong-with-the-secrecy-bill-short-version/
Posted by Mike Stuart at 10:45